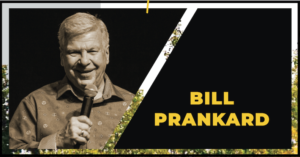 Bill Prankard is Founder of the Bill Prankard Evangelistic Association a healing evangelist with a burning vision for revival. In 1972, while pastoring a small Pentecostal Church in Canada, he had a life-changing encounter with the Holy Spirit in a Kathryn Kuhlman service. That experience launched him into international healing and evangelism ministry.  Thousands of people have received outstanding physical miracles and spiritual transformations as he crosses denominational lines and carries the full Gospel message, “in demonstration of the Spirit and power.”

The scripture that has been the driving vision of the BPEA ministry is Canada’s motto, Psalm 72:8 – “He shall have dominion from sea to sea, and from the river to the ends of the earth.”  During his more than five decades of evangelistic ministry, Bill has taken Healing and Hope “from sea to sea” in Canada and abroad. He established and led churches, hosted weekly and daily television ministry, and authored several books and publications.  At “the ends of the earth,” in both the Canadian and Russian Arctic, he and his teams took the Gospel where the name of Jesus had never been heard, mentored leaders and spearheaded the funding and establishment of native churches.

*Please note that scheduling is subject to change.

CHILD CARE WILL BE AVAILABLE AFTER WORSHIP FOR FRIDAY AND SATURDAY.

KIDS CHURCH AND NURSERY IS AVAILABLE ONLY ON SUNDAY MORNING.

THERE IS NO REGISTRATION FOR THIS EVENT.